'Scenes and Characters, No. 5, Love and Oysters'

'Scenes and Characters, No. 5, Love and Oysters'

If we had to make a classification of society, there are a particular kind of men whom we should immediately set down under the head of "Old Boys;" and a column of most extensive dimensions the old boys would require. To what precise causes the rapid advance of old boy population is to be traced, we are unable to determine; it would be an interesting and curious speculation, but, as we have not sufficient space to devote to it here, we simply state the fact that the numbers of the old boys have been gradually augmenting within the last few years, and are at this moment alarmingly on the increase. Upon a general review of the subject, and without considering it minutely in detail, we should be disposed to subdivide the old boys into two distinct classes—the gay old boys, and the steady old boys; the gay old boys, are punchy old men in the disguise of young ones, who frequent the Quadrant and Regent-street in the day-time, and the theatres (especially theatres under lady management) at night, assuming all the foppishness and levity of boys, without the excuse of youth or inexperience: the steady old boys are certain stout old gentlemen of clean appearance, who are always to be seen in the same taverns, at the same hours every evening, smoking and drinking in the same company. There was once a fine collection of old boys to be seen round the circular table at Offley’s every night, between the hours of half-past eight and half-past eleven. We have lost sight of them for some time, but there are still two splendid specimens in full blossom at the Rainbow, who always sit in the box nearest the fire-place, and smoke immense long cherry-stick pipes, which go under the table, with the bowls resting upon the floor. Grand old boys these are—fat, red-faced, white-headed old fellows, always there—one on one side the table, and the other opposite—puffing and drinking away like regular good ones, and never a bit the worse for it— everybody knows 'em, and it is supposed by some people that they're both immortal.

Mr. John Dounce was an old boy of the latter class (we don’t mean immortal, but steady)—a retired glove and brace-maker, a widower, resident with three daughters—all grown up, and all unmarried—in Cursitor-street, Chancery-lane. He was a short, round, large-faced, tubbish sort of a man with a broad-brimmed hat, and a square coat; and had that grave, but confident, kind of roll peculiar to old boys in general. Regular as clock-work—breakfast at nine—dress & tittivate a little—down to the Sir Somebody’s Head—glass of ale and the paper—come back again and take the daughters out for a walk—dinner at three—glass of grog and a pipe—nap—tea—little walk—Sir Somebody’s Head again—capital house;—delightful evenings! There were Mr. Harris, the law-stationer, and Mr. Jennings, the robe-maker (two jolly young fellows like himself), and Jones, the barrister’s clerk—a rum fellow that Jones—capital company—full of anecdote; and there they sat every night till just ten minutes before twelve, drinking their brandy and water, and smoking their pipes, and telling stories, and enjoying themselves with a kind of solemn joviality, particularly edifying. Sometimes Jones would propose a half-price visit to Drury Lane or Covent Garden, to see two acts of a five-act play, & a new farce, perhaps, or a ballet, on which occasions the whole four of them went together: none of your hurrying and nonsense, but having their brandy and water first, comfortably, and ordering a steak and some oysters for their supper against they came back, and then walking coolly into the pit, when the "rush" had gone in, as all sensible people do, and did when Mr. Dounce was a young man, except when the celebrated Master Betty was at the height of his popularity, and then, Sir,—then, Mr. Dounce perfectly well remembered getting a holiday from business, and going to the pit doors at eleven o’clock in the forenoon, and waiting there till six in the afternoon, with some sandwiches in a pocket-handkerchief, and some wine in a phial, and fainting after all with the heat and fatigue before the play began, in which situation he was lifted out of the pit into one of the dress boxes, Sir, by five of the finest women of that day, Sir, who compassionated his situation and administered restoratives, and sent a black servant, six foot high, in blue and silver livery, next morning with their compliments, and to know how he found himself, Sir—by God! Between the acts Mr. Dounce, and Mr. Harris, and Mr. Jennings used to stand up, and look round the house, and Jones—knowing fellow that Jones—knew every body—pointed ou the fashionable and celebrated Lady So-and-So in the boxes, at the mention of whose name Mr. Dounce, after brushing up his hair, and adjusting his neck-handkerchief, would inspect the aforesaid Lady So-and-So through an immense glass, and remark, either, that she was a "fine woman—very fine woman, indeed," or that "there might be a little more of her —Eh, Jones? just as the case might happen to be. When the dancing began, John Dounce, and the other old boys, were particularly anxious to see what was going forward on the stage, and Jones—wicked dog that Jones—whispered little critical remarks into the ears of John Dounce, which John Dounce retailed to Mr. Harris and Mr. Harris to Mr. Jennings; and then they all three laughed, 'till the tears ran out of their eyes. When the curtain fell they walked back together, two and two, to the steaks and oysters, and when they came to the second glass of brandy and water, Jones— hoaxing scamp, that Jones—used to recount how he had observed a lady in white feathers in one of the pit boxes, gazing intently on Mr. Dounce all the evening, and how he had caught Mr. Dounce, whenever he thought no one was looking at him, bestowing ardent looks of intense devotion on the lady in return; on which Mr. Harris and Mr. Jennings used to laugh very heartily, and John Dounce more heartily than either of 'em, acknowledging, however, that the time had been when he might have done such things; upon which Mr. Jones used to poke him in the ribs, and tell him he had been a sad dog in his time, which John Dounce, with chuckles, confessed. And after Mr. Harris and Mr. Jennings had preferred their claims to the character of having been sad dogs too, they separated harmoniously, & trotted home.

Now comes the moral of the story—for it has a moral after all. The last mentioned young lady, having derived sufficient profit and emolument from John Dounce’s attachment, not only refused, when matters came to a crisis, to take him for better for worse, but expressly declared, to use her own forcible words, that she wouldn’t have him at no price; and John Dounce, having lost his old friends, alienated his relations, and rendered himself ridiculous to every body, made offers successively to a schoolmistress, a landlady, a feminine tobacconist, and a housekeeper; and, being directly rejected by each and every of them, was accepted by his cook, with whom he lives now, a hen-pecked husband, a melancholy monument of antiquated misery, and a living warning to all uxorious old boys. 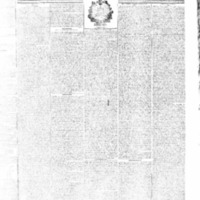