'Scenes and Characters, No. 7, The Vocal Dressmaker'

'Scenes and Characters, No. 7, The Vocal Dressmaker'

British Newspaper Archive, https://www.britishnewspaperarchive.co.uk/viewer/BL/0000355/18351122/001/0001. Some rights reserved. This work permits non-commercial use, distribution, and reproduction in any medium, provided the original author and source are credited.

Miss Amelia Martin was pale, tallish, thin, and two-and-thirty - what ill-natured people would call plain, and police reports interesting. She was a milliner and dressmaker, living on her business, and not above it. If you had been a young lady in service, and wanted Miss Martin, as a great many young ladies in service did, you'd just have stepped up in the evening to number forty-seven, Drummond-street, George-street, Euston-square, and after casting your eye on a brass door-plate, one foot ten, by one and a half, ornamented with a great brass knob at each of the four corners, and bearing the inscription "Miss Martin; millinery and dressmaking in all its branches;" you’d just have knocked two loud knocks at the street door, and down would have come Miss Martin herself, in a merino gown of the newest fashion, black velvet bracelets on the genteelest principle, and other little elegancies, of the most approved description. If Miss Martin know'd the young lady as called, or if the young lady as called had been recommended by any other young lady as Miss Martin knew, Miss Martin would forthwith show her up-stairs into the two-pair front, and chat she would - so kind, and so comfortable - it really wasn’t like a matter of business, she was so friendly; and, then Miss Martin, after contemplating the figure and general appearance of the young lady in service with great apparent admiration, would say how well she would look, to-be-sure, in a low dress with short sleeve, made very full in the skirts, with four tucks in the bottom, to which the young lady in service would reply in terms expressive of her entire concurrence in the notion, and the virtuous indignation with which she reflected on the tyranny of "Missis," who wouldn’t allow a young girl to wear a short sleeve of an ar'ternoon - no, nor nothing smart, not even a pair of ear-rings, let alone hiding people’s heads of hair under them frightful caps; at the termination of which complaint, Miss Amelia Martin would distantly suggest certain dark suspicions that some people were jealous on account of their own daughters, and was obliged to keep their servants’ charms under, for fear they should get married first, which was no uncommon circumstance - leastways she had known two or three young ladies in service as had married a great deal better than their missises, and they was not very good-looking either; and then the young lady would inform Miss Martin, in confidence, that how one of their young ladies was engaged to a young man, and was a-going to be married, and Missis was so proud about it there was no bearing her; but she needn’t hold her head quite so high neither, for, after all, he was only a clerk; and, after expressing a due contempt for clerks in general, and the engaged clerk in particular, and the highest opinion possible of themselves and each other, Miss Martin and the young lady in service would bid each other good night, in a friendly but perfectly genteel manner, and the one went back to her "place," and the other to her room on the second floor front.

Now, "coming out," either in acting, or singing, or society, or facetiousness, or anything else, is all very well, and remarkably pleasant to the individual principally concerned, if he or she can but manage to come out with a burst, and being out to keep out, and not go in again; but it does unfortunately happen that both consummations are extremely difficult to accomplish, and that the difficulties of getting out at all in the first instance, and if you surmount them of keeping out in the second, are pretty much on a par, and no slight ones either. And so Miss Amelia Martin shortly discovered. It is a singular fact (there being ladies in the case) that Miss Amelia Martin’s principal foible was vanity, and the leading characteristic of Mrs. Jennings Rodolph an attachment to dress. Dismal wailings were heard to issue from the second-floor front of number forty-seven, Drummond-street, George-street, Euston-square; it was Miss Martin practising. Half suppressed murmurs disturbed the calm dignity of the White Conduit orchestra at the commencement of the season. It was the appearance of Mrs. Jennings Rodolph in full dress that occasioned them. Miss Martin studied incessantly - the practising was the consequence. Mrs. Jennings Rodolph taught gratuitously now and then - the dresses were the result. Weeks passed away; the White Conduit season had begun, had progressed, and was more than half over. The dress-making business had fallen off from neglect, and its profits had dwindled away almost imperceptibly. A benefit-night approached; Mr. Jennings Rodolph yielded to the earnest solicitations of Miss Amelia Martin, and introduced her personally to the "comic gentleman" whose benefit it was. The comic gentleman was all smiles and blandness - he had composed a duet, expressly for the occasion, and Miss Martin should sing it with him. The night arrived; there was an immense room - ninety-seven goes of gin, thirty-two small glasses of brandy and water, five-and-twenty bottled ales, and forty-one neguses; and the ornamental painters' journeyman with his wife, and a select circle of acquaintance were seated at one of the side-tables near the orchestra. The concert began. Song-sentimental–by a light-haired young gentleman in a blue coat, and bright basket buttons [applause]. Another song, doubtful, by another gentleman in another blue coat, and more bright basket buttons - increased applause. Duet, Mr. Jennings Rodolph and Mrs. Jennings Rodolph, "Red Ruffian, retire!" - [great applause.] Solo Miss Julia Montague (positively on this occasion only) - "I am a Friar" - [enthusiasm.] Original duet, comic - Mr. H. Taplin (the comic gentleman) and Miss Martin - "The Time of Day" - "Brayvo! - Brayvo!" cried the ornamental painter’s journeyman’s party, as Miss Martin was gracefully led in by the comic gentleman. "Go to work Harry," cried the comic gentleman’s personal friends. "Tap-tap- tap," went the leader’s bow on the music-desk. The symphony began, and was soon afterwards followed by a faint kind of ventriloquial chirping, proceeding apparently from the deepest recesses of the interior of Miss Amelia Martin - "‘Sing out" –shouted one gentleman in a white great coat. "Don’t be afraid to put the steam on, old gal," exclaimed another. "S-s-s-s-s-s" - went the five-and-twenty bottled ales. "Shame, shame!" remonstrated the ornamental painter’s journeyman’s party - "S-s-s" went the bottled ales again, accompanied by all the gins and a majority of the brandies. - "Turn them geese out," cried the ornamental painters’ journeyman’s party, with great indignation. "Sing out," whispered Mr. Jennings Rodolph. - "So I do," responded Miss Amelia Martin. "Sing louder," said Mrs. Jennings Rodolph. "I can’t," replied Miss Amelia Martin - "Off, off, off," cried the rest of the audience. "Bray-vo!" shouted the painter’s party. It wouldn’t do - Miss Amelia Martin left the orchestra, with much less ceremony than she had entered it, and as she couldn’t sing out, never came out. The general good humour was not restored until Mr. Jennings Rodolph had become purple in the face, by imitating divers quadrupeds for half an hour without being able to render himself audible; and, to this day, neither has Miss Amelia Martin’s good humour been restored, nor the dresses made for and presented to, Mrs. Jennings Rodolph, nor the vocal abilities which Mr. Jennings Rodolph once staked his professional reputation she possessed. 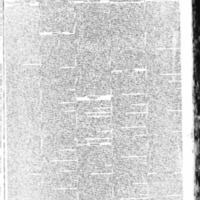