This collection (still in development) unites the five Christmas books that Dickens wrote between 1843 and 1848 and published firstly with Chapman and Hall and secondly with Bradbury and Evans.

Charles Dickens wrote the first of five Christmas books in 1843. A Christmas Carol, the story of a miser's slow repentance and decision to make amends, under the influence of the Ghosts of his old law partner Jacob Marley, Christmas Past, Christmas Present, and Christmas Future, would prove to be a timeless classic. In Scrooge's realization of his own selfishness, mortality, and responsibility towards both his impoverished employee and the faceless London poor, readers are compelled to reassess their own social actions evidenced over the course of a lifetime. Consequently, this Christmas book's cultural and academic legacy has overshadowed the other four subsequently penned by Dickens in response to public interest. Due to Dickens's use of various passages for public readings, it instantly commenced a theatrical life as well, and continues to be the most adapted of his works for film and stage.

Though the financial success of A Christmas Carol did not benefit Dickens to the degree he had hoped, its immediate attraction to Victorians and enduring legacy opened up a seasonal niche that author and publishers were eager to exploit annually, for multiple reasons. The Christmas books provided Dickens with a way to morally encourage and exhort his readers to better themselves and society under the influence of holiday sentiment. They also offered the chance to acquire some much-needed revenue.

Next, he wrote The Chimes: A Goblin Story of Some Bells that Rang an Old Year Out and a New Year In (Chapman and Hall, 1844). Continuing to point out socioeconomic discrepancies between Victorian strata, Dickens induces sympathy for the straitened porter Toby Veck, and the endangered future life of his beloved daughter, Meg, who is headed for catastrophe unless she can marry her sweetheart despite the ill-intentioned advice of politicians and the barrier of her own poverty.

The Cricket on the Hearth. A Fairy Tale of Home (Bradbury and Evans, 1845) dealt with the spectre of adultery in an age-gap marriage, later to be explored with a similar resolution in Dickens's novel David Copperfield (1850). Due to the evil Mr. Tackleton, a sinister toy-merchant, John Peerybingle comes to doubt the fidelity of his beloved young wife, Dot. The cricket, a chirping guardian spirit of the home, plays a significant part in the action that ensues. In this story, Dickens also features a blind girl, Bertha Plummer, one of his most extensive explorations of disability.

In 1846, The Battle of Life. A Love Story was published by Bradbury and Evans, a romantic tale set in the eighteenth century on the site of an ancient battle-field. Interestingly, it centres around the relationship between two sisters, Grace and Marion Jeddler, and the latter's engagement to a childhood friend, Alfred Heathfield. Several characters in this tale elicit interest, such as the intimate partners-in-law Mr. Snitchey and Mr. Craggs and the semi-literate maid Clemency. What might be the reader's philosophy of life is brought into question under the influence of the dramatic events that so greatly unsettle the rural village.

The last of these Christmas books, The Haunted Man and the Ghost's Bargain (Bradbury and Evans, 1848) represents a more sinister view of Christmas, with the full powers of a menacing double of the brooding Chemist Mr. Redlaw spiritually contending with the cheerful good-will of Milly William, a house-wife and friend to the poor. Like Dickens's later creation, Esther Summerson, Milly endeavours to brighten the lives of those around her while the double seeks to provoke their regrets.

Ultimately, Dickens would never pen another Christmas book, though he wrote the short reflective pieces "A Christmas Tree" (1850) and "What Christmas is, as we Grow Older" (1851) for Household Words. However, between 1852 and 1867, he annually orchestrated and significantly contributed to a Christmas number, either published in his periodicals Household Words or All the Year Round. In most cases, a scan of each full number - and Dickens's specific contributions, transcribed - can be accessed in the Dickens Search collection Christmas Stories.

Before citing the five texts in this collection of the Christmas books, please consult the metadata and pdf scan. In most cases, the edition is not the first, but the earliest that can be found freely digitised on the internet. Eventually, these will hopefully be replaced by scans of first editions, with the transcriptions updated, when necessary.

While building this collection, we have consulted, and transcribed scans found on databases such as Hathi Trust, Internet Archive, and Google Books; all items are linked to their original location on the internet. 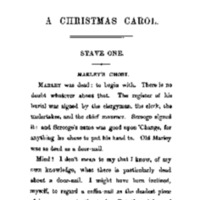 Published by Chapman and Hall (December 1843)

The Chimes: A Goblin Story of Some Bells that Rang an Old Year Out and a New Year In 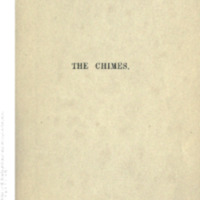 Published by Chapman and Hall, 1844

The Cricket on the Hearth. A Fairy Tale of Home 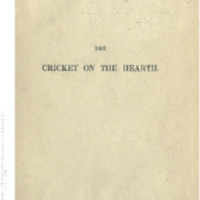 The Battle of Life. A Love Story 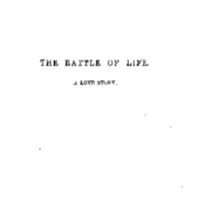 Published by Bradbury and Evans, 1846

The Haunted Man and the Ghost's Bargain 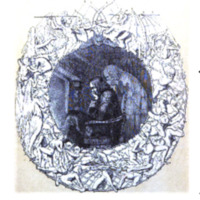 Published by Bradbury and Evans, December 1848
View all 5 items