'Scenes and Characters, No. 6, Some Account of an Omnibus Cad'

'Scenes and Characters, No. 6, Some Account of an Omnibus Cad'

We at once avoid a similar inability to record at what precise period, or by what particular process, this gentleman's patronymic, of William Barker, became corrupted into "Bill Boorker." Mr. Barker has required a high standing, and no inconsiderable reputation among the members of that profession to which he has more peculiarly devoted his energies; and to them he is generally known, either by the familiar appellation of "Bill Boorker," or the flattering designation of "Aggerawatin Bill"—the latter being a playful and expressive sobriquet, illustrative of Mr. Barker's great talent in "aggerawatin" and rendering wild such subjects of her Majesty as are conveyed from place to place, through the instrumentality of omnibuses.

Of the early life of Mr. Barker little is known, and even that little is involved in considerable doubt and obscurity. A want of application, a restlessness of purpose, a thirsting after porter, a love of all that is roving and cadger-like in nature, shared in common with many other great geniuses, appear to have been his leading characteristics. The busy hum of a parochial free-school, and the shady repose of a county gaol, were alike inefficacious in producing the slightest alteration in Mr. Barker's disposition - his feverish attachment to change and variety nothing could repress; his native daring no punishment could subdue. If Mr. Barker can be fairly said to have had any weakness in his earlier years, it was an amiable one—Love; Love in its most comprehensive form—a love of ladies, liquids, and pocket-handkerchiefs. It was no selfish feeling; it was not confined to his own possessions, which but too many men regard with exclusive complacency. No: it was a nobler love—a general principle; it extended itself with equal force to the property of other people. There is something very affecting in this: it is still more affecting to know, that such philanthropy is but imperfectly rewarded. Bow street, Newgate, and Millbank, are a poor return for general benevolence, evincing itself in an irrepressible love of all created objects. Mr. Barker felt it so—after a lengthened interview with the highest legal authorities, he quitted his ungrateful country with the consent, and at the expense, of its Government, proceeded to a distant shore, and there employed himself like another Cincinnatus in clearing and cultivating the soil—a peaceful pursuit, in which a term of seven years glided almost imperceptibly away. Whether, at the expiration of the period we have just mentioned, the British Government required Mr. Barker's presence here, or did not require his residence abroad, we have no distinct means of ascertaining. We should be inclined, however, to favour the latter position, inasmuch as we do not find that he was advanced to any other public post on his return, than the post at the corner of the Haymarket, where he officiated as assistant-waterman to the hackney-coach stand. Seated, in this capacity, on a couple of tubs near the kerb-stone, with a brass plate and number suspended round his neck by a massive chain, and his ancles curiously enveloped in haybands, he is supposed to have made those observations on human nature which exercised so material an influence over all his proceedings in later life, and the results of which we shall proceed very briefly to lay before our readers. Mr. Barker had not officiated for many months in this capacity, when the appearance of the first omnibus caused the public mind to go in a new direction, and prevented a great many hackney coaches from going in any direction at all. The genius of Mr. Barker at once perceived the whole extent of the injury that would be eventually inflicted on cab and coach stands, and, by consequence, on watermen also, by the progress of the system of which the first omnibus was a part. He saw, too, the necessity of adopting the persuits of some more profitable profession, and his active mind at once perceived how much might be done in the way of enticing the youthful and unwary, and shoving the old and helpless, into the wrong buss, and carrying them off, until, reduced to despair, they ransomed themselves by the payment of six-pence a head, or, to adopt his own figurative expression in all its native beauty, "till they was rig'larly done over, and forked out the stumpy." An opportunity for realising his fondest anticipations soon presented itself. Rumours were rife on the hackney-coach stands, that a buss was building to run from Lisson-grove to the Bank, down Oxford-street and Holborn, and the rapid increase of busses on the Paddington-road encouraged the idea. Mr. Barker secretly and cautiously inquired in the proper quarters. The report was correct—the "Royal William" was to make his first journey on the following Monday. It was a crack affair altogether. An enterprising young cabman, of established reputation as a dashing whip—for he had compromised with the parents of three scrunched children, and just "worked out" his fine for knocking down an old lady—was the driver; and the spirited proprietor, knowing Mr. Barker's qualifications, appointed him to the vacant office of cad on the very first application. The buss began to run, and Mr. Barker entered into a new suit of clothes, and on a new sphere of action.

To recapitulate all the improvements introduced by this extraordinary man into the omnibus system - gradually, indeed, but surely—would occupy a far greater space than we are enabled to devote to this imperfect memoir. To him is universally assigned the original suggestion of the practice which afterwards became so general—of the driver of a second buss keeping constantly behind the first one, and driving the pole of his vehicle either into the door of the other, every time it was opened, or through the body of any lady or gentleman who might make an attempt to get into it—a humorous and pleasant invention, exhibiting all that originality of idea, and fine bold flow of spirits, so conspicuous in every action of this great man. He has opponents of course; for what man in public life has not? but even his worst enemies cannot deny that he has taken more old ladies and gentlemen to Paddington who wanted to go to the Bank, and more old ladies and gentlemen to the Bank who wanted to go to Paddington, than any three men on the road: and however much malevolent spirits may pretend to doubt the accuracy of the statement, they well know it to be an established fact, that he has forcibly conveyed a variety of ancient persons of either sex, to both places, who had not the slightest or most distant intention of going anywhere at all. Mr. Barker was the identical cad who nobly distinguished himself, sometime since by keeping a tradesman on the step—the omnibus going at full speed all the time—till he had thrashed him to his entire satisfaction, and finally throwing him away when he had quite done with him. Mr. Barker it ought to have been who honestly indignant at being ignominiously ejected from a house of public entertainment, kicked the landlord in the knee, and thereby caused his death. We say it ought to have been Mr. Barker, because the action was not a common one, and could have emanated from no ordinary mind. We regret being compelled to state that it was not he—would, for the family credit, that we could add it was his brother!

It is in the exercise of the nicer details of his profession, that Mr. Barker's knowledge of human nature is beautifully displayed. He can tell at a glance where a passenger wants to go to, and  shouts the name of the place accordingly, without the slightest reference to the real destination of the buss; he knows exactly the sort of old lady that will be too much flurried by the process of pushing in, and pulling out of the caravan, to discover where she has been set down until too late; has an intuitive perception of what is passing in a passenger's mind when he inwardly resolves to "pull that cad up to-morrow morning;" & never fails to make himself agreeable to female servants whom, if he can place next the door, he talks to all the way. Human judgment is never infallible, and it has occasionally happened that Mr. Barker has experimentalised with the timidity or forbearance of the wrong sort of person, in which case a summons to a Police-office, has been the consequence, and a committal the finish. It is not for trifles such as these, however, to subdue a spirit like that which swells beneath the waistcoat of this heroic man. You may confine the body between four stone walls, or between four brick walls and a stone coping, which is much the same in effect—he cares not—you may cramp his body by confinement, or to prevent his body's getting the cramp, you may exercise his legs upon the mill—he defies your tyranny: he appeals from your oppressive enactments to the Paddington committee: and flies back to his profession with an ardour which persecution and involuntary abstinence have in no wise diminished. Like many other great men, Mr. Barker is a rigid predestinarian, or to advert once again to his own pointed and eloquent form of speech, he resons thus:—"If I am to get into trouble for this here consarn, I may as vell get into trouble for somethink as for nothink."—and acting upon this logical mode of reasoning, he sacrifices at the altar of philosophy any little scruples he might otherwise entertain, and gets into trouble with great ease and coolness getting out of it as well as he can; and losing no opportunity of getting into it again.

Such are a few traits in the character—such are a few incidents in the chequered life—of this remarkable man. Would that we could have conscientientiously entitled this hasty sketch a full account of his amiable existence up to the moment at which we are writing. We cannot do so. With "Some Account of an Omnibus Cad" we must be contented, and we hope our readers may be so too. 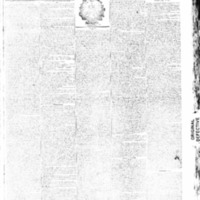