A brief preface states, 'LEAVES from an unpublished volume. By "BOZ," (which will be torn out once a fortnight).

In my rambles through the streets of London after evening has set in, I have often paused beneath the windows of some public hospital, and picture to myself the gloomy and mournful scenes that were passing within. The sudden moving of a taper as its feeble ray shot from window after window, until its light gradually disappeared, as if it were carried further back into the room to the bedside of some suffering patient, has been enough to awaken a whole crowd of reflections; the mere glimmering of the low-burning lamps which when all other habitations are wrapped in darkness and slumber, denote the chamber where so many forms are writhing with pain, or wasting with disease, has been sufficient to check the most boisterous merriment. Who can tell the anguish of those weary hours, when the only sound the sick man hears, is the disjointed wanderings of some feverish slumberer near him, the low moan of pain, or perhaps the muttered, long-forgotten prayer of a dying man? Who, but they who have felt it, can imagine the sense of loneliness and desolation which must be the portion of those who in the hour of dangerous illness are left to be tended by strangers,—what hands, be they ever so gentle, can wipe the clammy brow, or smooth the restless bed, like those of mother, wife, or child?

Impressed with these thoughts, I have turned away through the nearly-deserted streets; and the sight of the few miserable creatures still hovering about them, has not tended to lessen the pain which such meditations awaken. The hospital is a refuge and resting-place for hundreds, who but for such institutions must die in the streets and doorways; but what can be the feelings of outcasts like these, when they are stretched on the bed of sickness with scarcely a hope of recovery? The wretched woman who lingers about the pavement, hours after midnight, and the miserable shadow of a man—the ghastly remnant that want and drunkenness have left—which crouches beneath a window-ledge, to sleep where there is some shelter from the rain, have little to bind them to life, but what have they to look back upon, in death? What are the unwonted comforts of a roof and a bed to them, when the recollections of a whole life of debasement, stalk before them; when repentance seems a mockery, and sorrow comes too late?

About a twelvemonth ago, as I was strolling through Covent Garden (I had been thinking about these things overnight), I was attracted by the very prepossessing appearance of a pickpocket, who having declined to take the trouble of walking to the Police Office, on the ground that he hadn't the slightest wish to go there at all, was being conveyed thither in a wheelbarrow, to the huge delight of a crowd, but apparently not very much to his own individual gratification. Somehow, I never can resist joining a crowd—nature certainly intended me for a vagabond—so I turned back with the mob, and entered the office, in company with my friend the pickpocket, a couple of policemen, and as many dirty-faced spectators as could squeeze their way in.

There was a powerful, ill-looking young fellow at the bar, who was undergoing an examination on the very common charge of having, on the previous night, ill-treated a woman with whom he lived in some court hard by. Several witnesses bore testimony to acts of the grossest brutality, and a certificate was read from the house-surgeon of a neighbouring hospital, describing the nature of the injuries the woman had received, and intimating that her recovery was extremely doubtful. Some question appeared to have been raised about the identity of the prisoner; for when it was agreed that the two magistrates should visit the hospital at eight o'clock that evening, to take her deposition, it was settled that the man should be taken there also. He turned deadly pale at this, and I saw him clench the bar very hard when the order was given. He was removed directly afterwards, and he spoke not a word.

I felt an irrepressible curiosity to witness this interview, although I can hardly tell why, at this instant, for I knew it must be a painful one. It was no very difficult matter for me to gain permission, and I obtained it.

The prisoner, and the officer who had him in custody, were already at the hospital when I reached it, and waiting the arrival of the magistrates in a small room below stairs. The man was handcuffed, and his hat was pulled forward over his eyes. I could tell though, by the livid whiteness of his countenance, and the constant twitching of the muscles of his face, that he dreaded what was to come. After a short interval, the magistrates and clerk were bowed in, by the house-surgeon, and a couple of young men who smelt very strongly of tobacco-smoke—"dressers" I think they call them"—and after one magistrate had complained bitterly of the cold, and the other of the absence of any news in the evening paper, it was announced that the patient was prepared, and we were conducted to the "casualty ward" in which she was lying.

The dim light which burnt in the spacious room, increased rather than diminished the ghastly appearance of the hapless creatures in the beds, which were ranged in two long rows on either side. In one bed, lay a child enveloped in bandages, with its body half-consumed by fire; in another, a female, rendered hideous by some dreadful accident, was wildly beating her clenched fists on the coverlet, in an agony of pain; on a third, there lay stretched a young girl, apparently in the heavy stupor which is sometimes the immediate precursor of death: her face was stained with blood, and her breast and arms were bound up in folds of linen. Two or three of the beds were empty, and their recent occupants were sitting beside them, but with faces so wan, and eyes so bright and glassy, that it was fearful to meet their gaze. On every face was stamped the expression of anguish and suffering.

The object of the visit was lying at the upper end of the room. She was a fine young woman of about two or three and twenty. Her long black hair had been hastily cut from about the wounds on her head, and streamed over the pillow in jagged and matted locks. Her face bore frightful marks of the ill-usage she had received: her hand was pressed upon her side, as if her chief pain was there, her breathing was short and heavy, and it was plain to see that she was dying fast. She murmured a few words in reply to the magistrate's inquiry, whether she was in great pain: and having been raised on the pillow by the nurse, looked anxiously into the strange countenances that surrounded her bed. The magistrate nodded to the officer, to bring the man forward. He did so, and stationed him at the bedside. The girl looked on with a wild and troubled expression of face, but her sight was dim, and she did not know him.

"Take off his hat," said the magistrate. The officer did as he was desired, and the man's features were fully disclosed.

The girl started up with an energy quite preternatural; the fire gleamed in her heavy eyes, and the blood rushed to her pale and sunken cheeks. It was a convulsive effort. She fell back upon her pillow, and covering her scarred and bruised face with her hands, burst into tears. The man cast an anxious look towards her, but otherwise appeared wholly unmoved. After a brief pause the nature of the errand was explained, and the oath tendered.

"Oh, no, gentlemen," said the girl, raising herself once more, and folding her hands together; "no, gentlemen, for God's sake! I did it myself, it was nobody's fault, it was an accident. He didn't hurt me; he wouldn't for all the world. Jack, dear Jack, you know you wouldn't." Her sight was fast failing her, and her hand groped over the bedclothes in search of his, in vain. Brute as the man was, he was not prepared for this. He turned his face from the bed, and sobbed aloud. The girl's colour changed, and her breathing grew more difficult. She was evidently dying.

"We respect the feelings which prompt you to this," said the gentleman who had spoken first "but let me warn you, not to persist in what you know to be untrue, until it is too late. It cannot save him."

"Jack," murmured the girl, laying her hand upon his arm. "They shall not persuade me to swear your life away. He didn't do it, gentlemen He never hurt me." She grasped his arm tightly, and added, in a broken whisper, "I hope God Almighty will forgive me all the wrong I have done, and the life I have led. God bless you, Jack. Some kind gentleman take my love to my poor old father. Five years ago, he said he wished I had died a child. Oh, I wish I had! I wish I had!"

We turned away; it was no sight for strangers to look upon. The nurse bent over the girl for a few seconds, and then drew the sheet over her face. It covered a corpse. 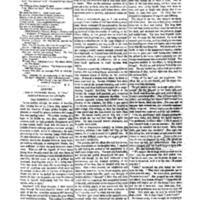