'Scenes and Characters, No. 1, Seven Dials'

'Scenes and Characters, No. 1, Seven Dials'

SEVEN DIALS.—We have always been of opinion that if Tom King and the Frenchman had not immortalised Seven Dials, Seven Dials would have immortalised itself. Seven Dials! the region of song and poetry—first effusions, and last dying speeches: hallowed by the names of Catnac and of Pitts—names that will entwine themselves with costermongers, and barrel organs, when penny magazines shall have superseded penny yards of song, and capital punishment be unknown! Look at the construction of the place. The gordian knot was all very well in its way: so was the maze of Hampton Court: so is the maze at the Beulah Spa: so were the ties of stiff white neckcloths, when the difficulty of getting one on was only to be equalled by the apparent impossibility of ever getting it off again. But what involutions can compare with those of Seven Dials—where is there such another maze of streets, courts, lanes, and alleys—where such a pure mixture of Englishmen and Irishmen, as in this complicated part of London? We boldly aver that we doubt the veracity of the legend to which we have adverted. We can suppose a man rash enough to inquire at random—at a house with lodgers too—for a Mr. Thompson, with all but the certainty before his eyes, of finding at least two or three Thompsons in any house of moderate dimensions; but a Frenchman—a Frenchman—in Seven Dials! Pooh! He was an Irishman. Tom King's education had been neglected in his infancy, and as he couldn't understand half the man said, he took it for granted he was talking French. The stranger who finds himself in "The Dials" for the first time, and stands Belzoni-like, at the entrance of seven obscure passages, uncertain which to take, will see enough around him to keep his curiosity and attention awake for no inconsiderable time. From the irregular square into which he has emerged, streets and courts dart in all directions, until they are lost in the unwholesome vapour which hangs over the house-tops, and renders the dirty perspective uncertain and confined; and lounging at every corner, as if they came there to take a few gasps of such fresh air as has found its way so far, but is too much exhausted already to be enabled to force itself into the narrow alleys around, are groups of people, whose appearance and dwellings would fill any mind but a regular Londoner's with astonishment. On one side a little crowd has collected round a couple of ladies, who having imbibed the contents of various "three-outs" of gin and cloves in the course of the morning, have at length differed on some point of domestic arrangement, and are on the eve of settling the quarrel satisfactorily by an appeal to blows, greatly to the interest of other ladies who live in the same house, and tenements adjoining, and who are all partisans on one side or other. "Vy don't you pitch into her Sarah?" exclaims one half-dressed matron, by way of encouragement. "S'elp me God, if my 'usband had treated her vith a drain last night, unbeknown to me, I'd tear her precious eyes out—a wixen!" "What's the matter, ma'am?" inquires another old woman, who has just bustled up to the spot. "Matter!" replies the first speaker, talking at the obnoxious combatant, "matter! Here's poor dear Mrs. Sulliwin, as has five blessed children of her own, can't go out a charing for one arternoon, but what hussies must be a comin and ticing avay her oun 'usband, as she's been married to twelve year come next Easter Monday, for I see the certificate ven I was a drinkin a cup o' tea vith her only the wery last blessed Ven'sday as ever vos sent. I appen'd to say promiscuously 'Mrs Sulliwin,' says I—"

"What do you mean by hussies?" interrupts a champion of the other party, who has evinced a strong inclination throughout to get up a branch fight on her own account ("Hoo-roar," ejaculates a pot-boy in a parenthesis, 'put the kye-bosh on her, Mary.") "What do you mean by hussies?" reiterates the champion. "Niver mind," replies the opposition expressively, "niver mind; you go home, and, ven you're quite sober, mend your stockings." This somewhat personal allusion, not only to the lady's habits of intemperance, but also to the state of her wardrobe, rouses her utmost ire, and she accordingly complies with the urgent request of the by-standers to "pitch in," with considerable alacrity. The scuffle became general, and terminates, in minor play-bill phraseology, with "arrival of the policemen—interior of the station-house, and impressive denouement." In addition to the numerous groups who are idling about the gin shops, and squabbling in the centre of the road, every post in the open space has its occupant, who leans against it for hours, with listless perseverance. It is odd enough that one class of men in London appear to have no enjoyment beyond leaning against posts. We never saw a regular bricklayer's labourer take any other recreation—fighting excepted. Pass through St. Giles's in the evening of a week day—there they are in their fustian dresses, spotted with brick-dust and whitewash—leaning against posts. Walk through Seven Dials on Sunday morning: there they are again—drab or light corduroy trousers, blucher boots, blue coats, and great yellow waistcoats—leaning against posts. The idea of a man dressing himself in his best clothes, to lean against a post all day! The peculiar character of these streets, and the close resemblance each one bears to its neighbour, by no means tends to decrease the bewilderment in which the unexperienced wayfarer through "the Dials" finds himself involved. He traverses streets of dirty, straggling houses, with here and there an unexpected court, composed of buildings as ill-proportioned and deformed as the half naked children that wallow in the kennels. Now and then, is a little dark chandler's shop, with a cracked bell hung up behind the door, to announce the entrance of a customer, or betray the presence of some young gentleman in whom a passion for shop tills has developed itself at an early age. Handsome, lofty buildings usurp the places of low dingy public-houses; long rows of broken and patched windows expose plants that may have flourished when "the Dials" were built, in vessels as dirty as "the Dials" themselves; and shops for the purchase of rags, bones, old iron, and kitchen stuff, vie in cleanliness with the bird-fanciers' and rabbit-dealers', which one might fancy so many arks, but for the irresistible conviction that no bird in its proper senses, who was permitted to leave one of them, would ever come back again. Brokers' shops, which would seem to have been established by humane individuals as refuges for destitute bugs, interspersed with announcements of day schools, penny theatres, petition-writers, mangles, and music for balls or routs, complete the "still life" of the subject; and dirty men, filthy women, squalid children, fluttering shuttlecocks, noisy battledores, reeking pipes, bad fruit, more than doubtful oysters, attenuated cats, depressed dogs, and anatomical fowls, are its cheerful accompaniments.

If the external appearance of the houses, or a glance at their inhabitants, presents but few attractions, a closer acquaintance with either is little calculated to alter one's first impression. Every room has its separate tenant, and every tenant is—by the same mysterious dispensation which causes a country curate to "increase and multiply" most marvellously—generally the head of a numerous family. The man in the shop, perhaps, is in the baked "jemmy" line, or the fire-wood and hearth-stone line, or any other line which requires a floating capital of eighteen-pence or thereabouts; and he and his family live in the shop, and the small back parlour behind it. Then there is an Irish labourer and his family in the back kitchen; and a jobbing man—carpet-beater and so forth—with his family in the front one. In the front one-pair there's another man with another wife and family, and in the back one-pair, there's "a young ooman as takes in tambour-work, and dresses quite genteel," who talks a good deal about "my friend," and "can't abear anything low." The second floor front, and the rest of the lodgers, are just a second edition of the people below, except a shabby-genteel man in the back attic, who has his half-pint of coffee every morning from the coffee-shop next door but one, which boasts a little front den called a coffee-room, with a fire-place, over which is an inscription, politely requesting that, "to prevent mistakes," customers will "please to pay on delivery." The shabby-genteel man is an object of some mystery, but as he leads a life of seclusion, and never was known to buy anything beyond an occasional pen, except half-pints of coffee, penny loaves, and ha'porths of ink, his fellow-lodgers very naturally suppose him to be an author; and rumours are current in the Dials, that he writes poems—for Mr Warren.

Now anybody who passed through the Dials on a hot summer's evening, and saw the different women in the house gossiping on the steps, would be apt to think that all was harmony among them, and that a more primitive set of people than the native Diallers could not be imagined. Alas! the man in the shop ill-treats his family; the carpet-beater extends his professional pursuits to his wife; the one-pair front has an undying feud with the two pair front, in consequence of the two-pair front persisting in dancing over his (the one-pair front's) head, when he and his family have retired for the night; the two-pair back will interfere with the front kitchen's children; the Irishman comes home drunk every other night, and attacks everybody; and the one-pair back screams at everything. Animosities spring up between floor and floor; the very cellar asserts his equality. Mrs A. smacks Mrs B.'s child for "making faces." Mrs B. forthwith throws cold water over Mrs A.'s child for "calling names." The husbands are embroiled—the quarrel becomes general—an assault is the consequence, and a police-office the result. 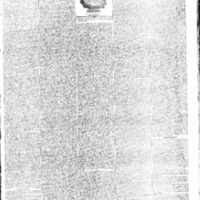