'Scenes and Characters, No. 2, Miss Evans and "The Eagle"'

'Scenes and Characters, No. 2, Miss Evans and "The Eagle"'

Mr. Samuel Wilkins was a carpenter—a journeyman carpenter, of small dimensions; decidedly below the middle size—bordering perhaps upon the dwarfish. His face was round and shiny, & his hair carefully twisted into the outer corner of each eye, till it formed a variety of that description of semi-curls, usually known as "haggerawators." His earnings were all-sufficient for his wants—varying from eighteen shillings to one pound five, weekly; his manner undeniable—his sabbath waistcoats dazzling. No wonder that with these qualifications Samuel Wilkins found favour in the eyes of the other sex; many women have been captivated by far less substantial qualifications. But Samuel was proof against their blandishments, until at length his eyes rested on those of a being for whom from that time forth he felt fate had destined him. He came and conquered—proposed and was accepted —loved and was beloved. Mr. Wilkins "kept company" with Jemima Evans. Miss Evans (or Ivins, to adopt the pronunciation most in vogue with her circle of acquaintance) had adopted in early life the harmless pursuit of shoe-binding, to which she had afterwards superadded the occupation of a straw-bonnet maker. Herself, her maternal parent, and two sisters, formed an harmonious quartett in the most secluded portion of Camden-town; and here it was that Mr. Wilkins presented himself one Monday afternoon in his best attire, with his face more shiny and his waistcoat more bright than either had ever appeared before. The family were just going to tea, and were so glad to see him. It was quite a little feast; two ounces of seven and sixpenny green, and a quarter of a pound of the best fresh; and Mr. Wilkins had brought a pint of shrimps, neatly folded up in a clean belcher, to give a zest to the meal, and propitiate Mrs. Ivins. Jemima was "cleaning herself" up-stairs: so Mr. Samuel Wilkins sat down, and talked domestic economy with Mrs. Ivins, whilst the two youngest Miss Ivins's poked bits of lighted brown paper between the bars, under the kettle, to make the water boil for tea. "I vos thinkin'" said Mr. Samuel Wilkins, during a pause in the conversation, "I vos a thinkin' of takin' J’mima to the Eagle to-night." "O my!" exclaimed Mrs. Ivins. "Lor! how nice!" said the youngest Miss Ivins. "Well; I declare!" added the youngest Miss Ivins but one. "Tell J’mima to put on her white muslin, Tilly," screamed Mrs. Ivins, with motherly anxiety; and down came J’mima herself soon afterwards in a white muslin gown, carefully hook-and-eyed, and little red shawl plentifully pinned, and white straw bonnet trimmed with red ribbons, and a small necklace and large pair of bracelets, and Denmark satin shoes, and open-work stockings, white cotton gloves on her fingers, and a cambric pocket-handkerchief carefully folded up in her hand—all quite genteel and ladylike. And away went Miss Jemima Ivins, and Mr. Samuel Wilkins, and a dress cane, with a gilt knob at the top, to the admiration and envy of the street in general, and to the high gratification of Mrs. Ivins, and the two youngest Miss Ivinses in particular. They had no sooner turned into the Pancras-road, than who should Miss Jemima Ivins stumble upon by the most fortunate accident in the world, but a young lady as she knew, with her young man, and—it is so strange how things do turn out sometimes—they were actually going to the Eagle too. So Mr. Samuel Wilkins was introduced to Miss Jemima Ivins’s friend’s young man, and they all walked on together, talking, and laughing and joking away like anything; and when they got as far as Pentonville, Miss Ivins’s friend’s young man would have the ladies go into the Crown to taste some shrub, which, after a great blushing and giggling, and hiding of faces in elaborate pocket-handkerchiefs, they consented to do. Having tasted it once, they were easily prevailed upon to taste it again; and they sat out in the garden tasting shrub, and looking at the Busses alternately 'till it was just the proper time to go to the Eagle; and then they resumed their journey, and walked on very fast, for fear they should lose the beginning of the concert in the Rotunda.

"How ev’nly!" said Miss J’mima Ivins and Miss J’mima Ivins’s friend both at once, when they had passed the gate, and were fairly inside the gardens. There were the walks beautifully gravelled and planted; and the refreshment boxes painted and ornamented like so many snuff-boxes, and the variegated lamps shedding their rich light upon the company’s heads, and the place for dancing ready chalked for the company’s feet, and a Moorish band playing at one end of the gardens, and an opposition military band playing away at the other. Then the waiters were rushing to and fro with glasses of negus, and glasses of brandy and water, and bottles of ale and bottles of stout; and ginger-beer was going off in one place, and practical jokes were going on in another; and people were crowding to the door of the rotunda, and in short the whole scene was, as Miss J’mima Ivins, inspired by the novelty, or the shrub, or both, observed— "one of dazzlin excitement." As to the concert room, never was anything half so splendid. There was an orchestra for the singers, all paint, gilding, and plate glass; and such an organ! Miss J’mima Ivins’s friend’s young man whispered it had cost "four hundred pound," which Mr. Samuel Wilkins said was "not dear neither"—an opinion in which the ladies perfectly coincided. The audience were seated on elevated benches round the room, and crowded into every part of it, and every body was eating and drinking as comfortably as possible. Just before the concert commenced, Mr. Samuel Wilkins ordered two glasses of rum-and-water "warm with," and two slices of lemon, for himself and the other young man, together with "a pint o’ sherry wine for the ladies, and some sweet carraway-seed biscuits;" and they would have been quite comfortable and happy, only one gentleman with large whiskers would stare at Miss J’mima Ivins, and another gentleman in a plaid waistcoat would wink at Miss J’mima Ivins’s friend; on which Miss Jemima Ivins’s friend’s young man exhibited symptoms of boiling over, and began to mutter about "people’s imperence" and "swells out o’ luck," and to intimate in oblique terms a vague intention of knocking somebody’s head off, which he was only prevented from announcing more emphatically by both Miss J’mima Ivins and her friend, threatening to faint away on the spot if he said another word. The concert commenced—overture on the organ. "How solemn!" exclaimed Miss J’mima Ivins, glancing, perhaps unconsciously, at the gentleman with the whiskers. Mr. Samuel Wilkins, who had been muttering apart for some time past, as if he were holding a confidential conversation with the gilt knob of the dress-cane, breathed very hard;—breathing vengeance perhaps, but said nothing. "The Soldier tired," Miss somebody, in white satin. "Ancore!" cried Miss J’mima Ivins’s friend. "Ancore!' shouted the gentleman in the plaid waistcoat immediately, hammering the table with a stout bottle. Miss J’mima Ivins’s friend’s young man eyed the man behind the waistcoat from head to foot, and cast a look of interrogative contempt towards Mr. Samuel Wilkins. Comic song, accompanied on the organ. Miss J’mima Ivins was convulsed with laughter—so was the man with the whiskers. Everything the ladies did, the plaid waistcoat and whiskers did, by way of expressing a unity of sentiment and congeniality of soul; and Miss J’mima Ivins, and Miss J’mima Ivins’s friend grew lively and talkative, as Mr. George Wilkins and Miss J’mima Ivins’s friend’s young man grew morose, and surly in inverse proportion.

Now, if the matter had ended here, the little party might soon have recovered their former equanimity; but Mr. Samuel Wilkins and his friend began to throw looks of defiance upon the waistcoat and whiskers; and the waistcoat and whiskers, by way of intimating the slight degree in which they were affected by the looks aforesaid, bestowed glances of increased admiration on Miss J’mima Ivins and friend. The concert and vaudeville concluded—they promenaded the gardens. The waistcoat and whiskers did the same, and made divers remarks complimentary to the ancles of Miss J’mima Ivins and friend, in an audible tone. At length, not satisfied with these numerous atrocities, they actually came up, and asked Miss J’mima Ivins and Miss J’mima Ivins’s friend to dance, without taking no more notice of Mr. Samuel Wilkins and Miss J’mima Ivins’s friend’s young man, than if they was nobody! "What do you mean by that, scoundrel?" exclaimed Mr. Samuel Wilkins, grasping the gilt-knobbed dress cane firmly in his right hand. "What’s the devil's the matter with you, you little humbug?" replied the whiskers. "How dare you insult me and my friend?" inquired the friend’s young man. "You and your friend be damned," responded the waistcoat. "Take that!" exclaimed Mr. Samuel Wilkins. The ferrule of the gilt-knobbed dress cane was visible for an instant, and then the light of the variegated lamps shone brightly upon it, as it whirled into the air, cane and all. "Give it him," said the waistcoat. "Luller-li-e-te," shouted the whiskers. "Horficer!" screamed the ladies. It was too late. Miss J’mima Ivins’s beau and the friend’s young man, lay gasping on the gravel, and the waistcoat and whiskers were seen no more. Miss J’mima Ivins and friend, being conscious that the affray was in no slight degree attributable to themselves, of course went into hysterics forthwith; declared themselves the most injured of women; exclaimed, in incoherent ravings, that they had been suspected—wrongfully suspected—oh, that they should ever have lived to see the day, &c.; suffered a relapse every time they opened their eyes, and saw their unfortunate little admirers; and were carried to their respective abodes in a hackney-coach in a state of insensibility, compounded of shrub, sherry, and excitement. 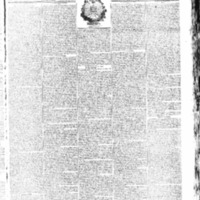