Next to Christmas-day, the most pleasant annual epoch in existence is the advent of the New Year. There are a lachrymose set of people who usher in the New Year with watching and fasting, as if they were bound to attend as chief mourners at the obsequies of the old one. Now, we cannot but think it a great deal more complimentary, both to the old year that has rolled away, and to the new year that is just beginning to dawn upon us, to see the old fellow out, and the new one in, with gaiety and glee. There must have been some few occurrences in the past year to which we can look back, with a smile of cheerful recollection, if not with a feeling of heartfelt thankfulness; and we are bound by every rule of justice and equity to give the new year credit for being a good one, until he proves himself unworthy the confidence we repose in him.

This is our view of the matter; and entertaining it, notwithstanding our respect for the old year, one of the few remaining moments of whose existence passes away with every word we write, here we are, seated by our fireside on this last night of the old year, one thousand eight hundred and thirty-five, penning this article, and drinking our grog with as jolly a face as if nothing extraordinary had happened, or was about to happen, to disturb our equanimity. Hackney coaches and carriages keep rattling up the street and down the street in rapid succession, conveying, doubtless, smartly-dressed coachfulls to crowded parties; loud and repeated double knocks at the house with green blinds opposite, announce to the whole neighbourhood that there's one large party in the street at all events; and we saw through the window—and through the fog too, till it grew so thick that we rung for candles, and drew our curtains—pastry-cooks' men with green boxes on their heads, and rout furniture—warehouse carts, with cane seats and French lamps, hurrying to the numerous houses where an annual festival is held in honour of the occasion.

We have scarcely written the last word of the previous sentence, when the first stroke of twelve peals from the neighbouring churches; there is something awful in the sound. Strictly speaking, it may not be more impressive now than at any other time, for the hours steal as swiftly on at other periods, and their flight is little heeded. But, we measure man's life by years, and it is a solemn knell that warns us we have passed another of the boundaries which stand between us and the grave; disguise it as we may, the reflection will force itself on our minds that when next that bell announces the arrival of a new year, we may be insensible alike of the timely warning we have so often neglected, and of all the warm feelings that glow within us now.

But twelve has struck, and the bells ring merrily out which welcome the new year. Away with all gloomy reflections. We were happy and merry in the last one, and will be, please God, in this. So as we are alone, and can neither dance it in, nor sing it in, here goes our glass to our lips, and a hearty welcome to the year one thousand eight hundred and thirty-six say we. 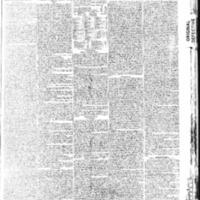