'Scenes and Characters, No. 10, Christmas Festivities'

'Scenes and Characters, No. 10, Christmas Festivities'

Christmas time! That man must be a misanthrope indeed in whose breast something like a jovial feeling is not roused—in whose mind some pleasant associations are not awakened—by the recurrence of Christmas. There are people who will tell you that Christmas is not to them what it used to be—that each succeeding Christmas has found some cherished hope or happy prospect of the year before dimmed or passed away —and that the present only serves to remind them of reduced circumstances and straitened incomes—of the feasts they once bestowed on hollow friends, and of the cold looks that meet them now, in adversity and misfortune. Never heed such dismal reminiscences. There are few men who have lived long enough in the world who cannot call up such thoughts any day in the year. Then do not select the merriest of the three hundred and sixty-five for your doleful recollections, but draw your chair nearer the blazing fire—till the glass, aud send round the song—and, if your room be smaller than it was a dozen years ago, or if your glass is filled with reeking punch instead of sparkling wine, put a good face on the matter, and empty it off-hand, and fill another, and troll off the old ditty you used to sing, and thank God it's no worse. Look on the merry faces of your children as they sit round the fire. One little seat may be empty—one slight form that gladdened the father's heart and rouse the mother's pride to look upon may not be there. Dwell not upon the past—think not that, one short year ago, the fair child now fast resolving into dust sat before you, with the bloom of health upon its cheek, and the gay unconsciousness of infancy in its joyous eye. Reflect upon your present blessings—of which all man have some. Fill your glass again, with a merry face and a contented heart. Our life on it but your Christmas shall be merry, and your new year a happy one.

Who can be insensible to the outpourings of good feeling, and the honest interchange of affectionate attachment, which abound at this season of the year? A Christmas family party! We know nothing in nature more delightful! There seems a magic in the very name of Christmas. Petty jealousies and discords are forgotten: social feelings are awakened in bosoms to which they have long been strangers; father and son, or brother and sister, who have met and passed with averted gaze, or a look of cold recognition for months before, proffer and return the cordial embrace, and bury their past animosities in their present happiness. Kindly hearts that have yearned towards each other but have been withheld by false notions of pride and self dignity, are again united, and all is kindness and benevolence! Would that Christmas lasted the whole year through, and that the prejudices and passions which deform our better nature were never called into action among those to whom, at least, they should ever be strangers!

As to the dinner, its perfectly delightful—nothing goes wrong, and everybody is in the very best of spirits, and disposed to please and be pleased. Grandpapa relates a circumstantial account of the purchase of the turkey, with a slight digression relative to the purchase of previous turkeys on former Christmas Days, which grandmamma corroborates in the minutest particular: Uncle George tells stories, and carves poultry, and takes wine, and jokes with the children at the side-table, and winks at the cousins that are making love, or being made love to, and exhilarates everybody with his good humour and hospitality; and when at last a stout servant staggers in with a gigantic pudding, with a sprig of holly in the top, there is such a laughing, and shouting, and clapping of little chubby hands, and kicking up of fat dumpy legs, as can only be equalled by the applause with which the astonishing feat of pouring lighted brandy into mince pies is received by the younger visitors. Then the dessert!—and the wine!—and the fun! Such beautiful speeches, and such songs, from Aunt Margaret's husband, who turns out to be such a nice man, and so attentive to grandmamma! Even grandpapa not only sings his annual song with unprecedented vigour, but, on being honoured with an unanimous encore, according to annual custom; actually comes out with a new one, which nobody but grandmamma ever heard before, and a young scape-grace of a cousin, who has been in some disgrace with the old people, for certain heinous sins of omission and commission—neglecting to call, and persisting in drinking Burton ale—astonishes everybody into convulsions of laughter by volunteering the most extraordinary comic songs that were ever heard. And thus the evening passes in a strain of national good-will and cheerfulness, doing more to awaken the sympathies of every member of the party in behalf of his neighbour, and to perpetuate their good feeling during the ensuing year, than all the homilies that have ever been written, by all the Divines that have ever lived.

There are a hundred associations connected with Christmas which we should very much like to recall to the minds of our readers; there are a hundred comicalities inseparable from the period, on which it would give us equal pleasure to dilate. We have attained our ordinary limits, however, and cannot better conclude than by wishing each and all of them, individually & collectively, "a merry Christmas happy new year." 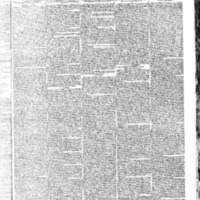