'Scenes and Characters, No. 9, The Parlour'

'Scenes and Characters, No. 9, The Parlour'

A snug parlour in winter, with a sofa on one side the blazing fire, an easy chair on the other, and a table in the centre, bearing a liquor-stand, glasses, and cigars, the whole seen to the greatest advantage by the soft light of a French lamp, which falls delicately on the curtains you have carefully drown to exclude the wind, and enable you to eye your damask with great complacency—a snug parlour under such circumstances is a temporary Elysium, and well deserves to be lauded by an abler pen than ours. A pair of parlours "genteelly furnished" for a single gentleman, with a French bedstead for one in the back parlour, and cane-bottomed chairs for six in the front—all for twelve shilllings a week and attendance included, have their charms also. A breakfast parlour's no bad thing, when you're spending a week with a pleasant family in the country; and an hour or two may be passed very agreeably in a dining parlour in town. But though each and every of the parlours we have just enumerated has its own peculiar merits and attractions, to no one among them are we about to make any further allusion. The question then very naturally arises, what kind of parlour do we mean?—and that question we will resolve at once.

We had been lounging, the other evening, down Oxford-strewet, Holburn, Cheapside, Coleman-street, Finsbury-square, and so on, with the intention of returning by Petonville and the New-road, when we began to feel rather thirsty, and disposed to rest for five or ten minutes; so we turned back to a quiet decent public house, which we remembered to have passed but a moment before (near the City-road), for the purpose of solacing ourselves with a glass of ale. The house was none of your stuccoed, French-polished, illuminated palaces, but a modest public-house of the old school, with a little old bar, and a little old landlord, who, with a wife and daughter of the same pattern, was comfortably seated in the bar aforesaid—a snug little room, with a cheerful fire, protected by a large screen, from behind which the young lady emerged, on our representing our inclincation for a glass of ale. "Won't you walk into the parlour, Sir?" said the young lady in seductie tones. "You'd better walk into the parlour, Sir," said the little old landlord, throwing his chair back, and looking round one side of the screen, to survey our appearance. "You'd much better step into the parlour, Sir," said the little old lady, popping her head out at the other side of the screen. And on our looking slightly round, as if in ignorance of the locality so much recommended, the little old landlord bustled out at the small door of the small bar, and forthwith ushured us into the parlour itself.

It was an ancient dark-looking room, with a sanded floor and high mantel-piece, over which was an old coloured print of some naval engagement, representing two men-of-war banding away at each other most vigorously, with another vessel or two oblowing up in the distance, and an interesting foreground of broken masts and blue legs sticking out of the water. Depending from the ceiling, in the centre of the room, were a gas-light and bell-pull, and on each side were three or four long narrow tables, behind which was a thickly planted row of those slippy shiny looking wooden chairs peculiar to places of this description. The monstrous appearance of the sanded boards was relieved by an occasional spittoon, and a triangular pile of these useful articles adored the two upper corners of the apartment.

At the further table, nearest the fire, with his face towards the door at the bottom of the room, sat a stoutish man of about forty, whose short stiff black hair, curled closely round a broad high forehead and face to which something besides water and exercise had communicated a rather inflamed appearance. He was smoking a cigar, with his eyes fixed on the ceiling, and had that confident, orucular air, which marked him as the leading politician, general authority, and universal anecdote relator of the place. He had evidently just delivered himself of something veay weighty, for the remainder of the company were puffing away at their respective pipes and cigars, in a kind of solemn abstraction, as if quite overwhelmed with the magnitude of the subject recently under discussion. On his right sat an elderly man, with a white head and broad-brimmed brown hat, and on his left a sharp-nosed light-haired man, in a brown surtout reaching nearly to his heels, who took a whiff at his pipe and an admiring glance at the red-faced man alternately.—"Very extraordinary!" said the light haired man, after a pause of five minutes; a murmur of assent ran through the company. "Not at all extraordinary—not at all," said the red faced man, awakening suddenly from his reverie; and turning upon the light-haired man, the moment he had spoken. "Why should it be extraordinary?—why is it extraordinary?—Prove it to be extraordinary." "Oh, if you come to that—" said the light-haired man. "Come to that!" ejaculated the man with the red face; "but we must come to that. We stand in these times upon a calm elevation of intellectual attainment, and not in the dark recess of mental deprivation. Proof is what I require—proof, and not assertions in these stirring times. Every gen’lem’n that knows me knows what was the nature and effect of my observations, when it was in the contemplation of the Old-street Suburban Representative Discovery Society to recommend a candidate for that place in Cornwall there—I forget the name of it." “Mr. Snobee, (said Mr. Wilson) is a fit and proper person to represent the borough in Parliament.” “Prove it,” says I. “He is a friend to Reform,” says Mr. Wilson. “Prove it,” says I. “The abolitionist of the national debt, the unflinching opponent of pensions, the uncompromising advocate of the negro, the reducer of sinecures and the duration of Parliaments, the extender of nothing but the suffrages of the people,” says Mr. Wilson. “Prove it,” says I. “His acts prove it,” says he. “Prove them,” says I. "And he could not prove them (said the red-faced man, looking round triumphantly) "and the borough didn’t have him; and if you carried this principle to the full extent, you’d have no debt, no pensions, no sinecures, no negroes, no nothing; and then, standing upon an elevation of intellectual attainment, and having reached the summit of popular prosperity, you might bid defiance to the nations of the earth, and erect yourselves in the proud confidence of wisdom and superiority. This is my argument—this always has been my argument—and if I was a Member of the House of Commons to-morrow, I’d make ’em shake in their shoes with it "—and the red-faced man hit the table very hard with his clenched fist, by way of adding weight to the declaration, and then smoked away like a brewery. "Well!" said the sharp-nosed man, in a very slow and soft voice, addressing the company in general, "I always do say that, of all the gentlemen I have the pleasure of meeting in this room, there is not one whose conversation I like to hear so much as Mr. Rogers’s, or who is such improving company." "Improving company! (said Mr. Rogers, for that was the name of the red-faced man). Damme, you may say I'm improving company, for I’ve improved you all to some purpose; though as to my conversation being as my friend Mr. Ellis here describes it, that's not for me to say anything about; you, gentlemen, are the best judges on that point; but this I will say, when I came into this parish, and first used this room, ten years ago, I don’t believe there was one man in it who knew he was a slave, and now you all know it, and writhe under it. Inscribe that upon my tomb, and I'm satisfied." "Why, as to inscribing it on your tea-chest," said a little dirty green-grocer, with a rather dirty face, "of course you can have anything chalked up as you likes to pay for, so far as it relates to yourself and your affairs; but when you come to talk about slaves and that there gammon, you’d better keep it in the family, ’cos I, for one, don’t like to be called them names night after night." "You are a slave," said the red-faced man, "and the most pitiable of all slaves."Wery hard if I am," interrupted the green-grocer, "for I got no good out of the twenty millions, anyhow." "A willing slave," ejaculated the red-faced man, getting more red with eloquence, and contradiction, "resigning the dearest birth-right of your children, neglecting the sacred call of Liberty, who standing imploringly before you, appeals to the warmest feelings of your heart, and points to your helpless infants but in vain." "Prove it," said the green-grocer. "Prove it," ejaculated the man with the red face. "Bending beneath the yoke of an insolent and factious oligarchy: bowed down before the domination of cruel laws, groaning beneath tyranny and oppression on every hand, at every side, and in every corner. Prove it!" And the red-faced man sneered melo-dramatically, and buried his indignation in a quart pot.


"Very true, Mr. Rogers, very true," said a stout broker in a large waistcoat. "That's the pint, Sir." "Ah to be sure," acquiesced divers other members of the company. "You'd better let him alone, Tommy," said the broker, by way of advice to the little green-grocer. "He can tell wot’s o’clock by an eight-day, without looking at the minute-hand, he can. Try it on, on some other suit, you won't score nothing here, old feller." "What is a man,"  said the red-faced specimen of the species, jerking his hat from its peg on the wall—"what is an Englishman? Is he to be trampled upon by every oppressor? is he to be knocked down at any body’s bidding?" ("Decidedly not," from the broker). "What is freedom?—Not a standing army.—What is a standing army? Not freedom.—What is general happiness? Not universal misery. Liberty is not the window tax, nor the Lords the people." And the red-faced man gradually bursting into a radiating sentence, in which the words "oppression," tyranny," "violence," "misrule," "dastardly Whigs," "sanguinary Tories," "Mr. Roebuck," "depreciation of the currency," and "voluntary principle," were most conspicuous, and finally left the room with an indignant bounce.

"Wonderful man!" said he of the sharp nose.

"Great power!" said everybody but the green-grocer.

"Great ass," thought we—"a very common character, and in no degree exaggerated. Empty-headed bullies, who by their ignorance and presumption bring into contempt whatever cause they are connected with: equally mischievous in any assembly from the highest to the lowest, and disgusting in all. There is a red-faced man in every 'parlour.'" 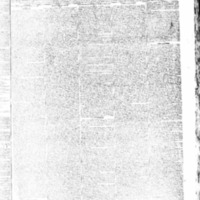